You need to understand I hate shopping, crowds, and early mornings. But when I received an email from one of my favorite quilt shops that they were having a Black Friday Sale of 40% off I really gave this a lot of thought. Ok so I decided I could drive 1 & 1/2 hours one way for 40% off and I didn't even have to get up early. This shop doesn't open up until 10AM. My husband went with me and was I surprised when we pulled into the parking lot. Only 4 cars in the parking lot at 10AM. I knew what I wanted so in 15 minutes I had purchased my fabric and was ready to leave. I think this is a first for me to only be in a quilt shop 15 minutes. I am going to do a online New Year's Eve mystery and I need some fabric to go with the jelly roll. The beige will be the background fabric and the red is the pop color. 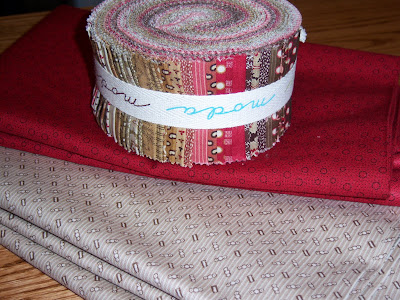 The next stop was lunch and then home. I can handle this kind of Black Friday shopping.

Here is what I have been working on this week. This back for the I Spy baby quilt. 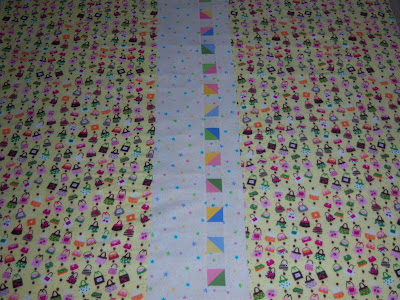 I am working on this quilt for a Christmas gift. I had lots of squares left from another quilt like this so I decide to make another one. I just need to put the borders on it. The outside border will be purple like the cornerstones. 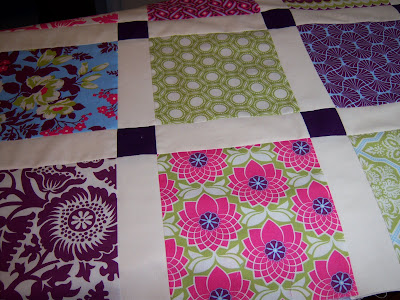 Before I go back to working on this quilt I think I will stop over at Sarah's to see what everyone else is up to this week-end.

I have been busy finishing up a couple of quilts. This red and black quilt is a wedding gift for this week-end. I made a heart label and appliqued it on the back but you can see the outline of the heart on the front. 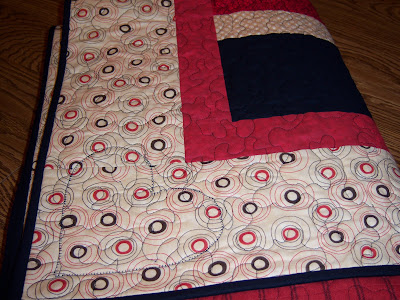 I used red and black flannel for the backing. I hope the young couple will enjoy their quilt. 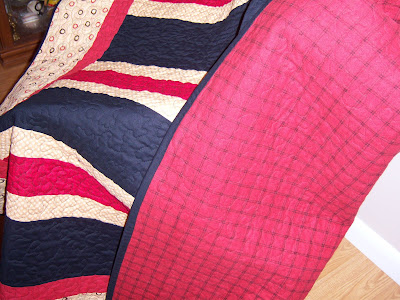 Last Monday I received an email and subject line said: "difficult news". When you see that subject line you know the news is not good. As I read the email I learn a staff member in the school district I work for has advanced cancer. This is not the first time she has had to deal with cancer. Diane started chemo a week ago. My first thought was I need to do something for Diane. I know a prayer quilt. I stopped working on the wedding quilt to make a prayer quilt. In four days the quilt was finished. I had the privilege of giving the quit to her. I added many prayer ties for her family and friends to say a prayer for her as she fights cancer again.

I always wonder if I am doing enough for others. Then I remember this poem.

Once upon a time there was a wise man who used to go to the ocean to do his writing. He had a habit of walking on the beach before he began his work. One day he was walking along the shore. As he looked down the beach, he saw a human figure moving like a dancer. He smiled to himself to think of someone who would dance to the day. So he began to walk faster to catch up. As he got closer, he saw that it was a young man and the young man wasn't dancing, but instead he was reaching down to the shore, picking up something and very gently throwing it into the ocean. As he got closer he called out, "Good morning! What are you doing?" The young man paused, looked up and replied, "Throwing starfish in the ocean." "I guess I should have asked, why are you throwing starfish in the ocean?" "The sun is up and the tide is going out. And if I don't throw them in they'll die." "But, young man, don't you realize that there are miles and miles of beach and starfish all along it. You can't possibly make a difference!" The young man listened politely. Then bent down, picked up another starfish and threw it into the ocean, past the breaking waves and said - "It made a difference for that one."

I know this quilt made a difference to Diane.
May the prayers bring Diane peace and comfort. 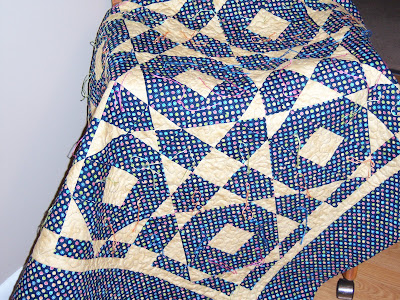 I have been sewing on my "I Spy" block swap blocks that I received. Here is a baby quilt for a girl. 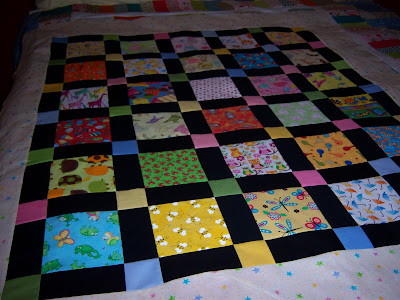 The wild part of my Wednesday was work. Do you ever not get anything accomplished that you set out to do in a day? Well that was my Wednesday today.
At least my sewing the last couple of weeks has been successful.

I May Have A Scrap Problem